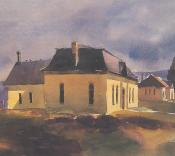 Centerfield was first known as Skin Town. It seems that about 1880, a new method for tanning cowhides was discovered and implemented in New York. At the same time, Sanpete suffered a terrible winter with such deep snow that many cattle couldn’t find enough forage and died. In order to keep their operations from being a total loss, the ranchers skinned the cows, used the new tanning method on the hides, and hung them out on their fences to dry. The fact that all the fences were draped with cow hides led to the name “Skin Town”.

It was also called South Gunnison or Twin Town. When the town was incorporated in 1907, the residents chose the more dignified name of Centerfield because of the community’s central location. Centerfield is an 1860’s offshoot of Gunnison that evolved two miles south on US 89. Gunnison Field or Gunnison South was a natural site for farmers who worked small “squatters rights” plots of about five acres with oxen and hand plows. After the Indian troubles subsided, log and adobe houses began to appear. A late 1876 petition to ‘build a school convenient to our location’ was an early sign of independence from the mother colony. In 1882 a log cabin was built to serve as school, church and social hall. The 1886-87 church was built of stone and a front tower was added in 1897.

Community spirit was strong by that time, and Canute Peterson chose a committee of four who named the place for its location in the fields between Gunnison and Axtell.
City Hall: 130 South Main, Centerfield, Ut 84622     Phone: 435-528-3296
Centerfield City Website