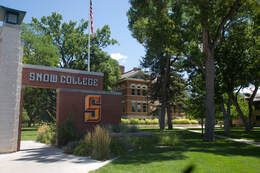 Ephraim, the largest town in Sanpete County, was founded by a lone settler, Isaac Behunin, who claimed 40 acres on Pine Creek. Because of Indian troubles, he and his family has to abandon their homestead and move to the Manti Fort in 1853.
When it was deemed safe to return in 1854, Behunin found that he was no longer alone. Several families tagged along and built homes in the place they called Cottonwood Creek. Because of the unpredictable temperament of the Indians they soon put up a fort approximately a square block in size and the settlement was called Fort Ephraim, getting its name from one of the tribes of Israel mentioned in the Old Testament. The security of the fort drew a diverse group of settlers to the area, Danes, Swedes, and Norwegians. When the Danes moved in, they called it “Little Denmark”. Yet once “Fort” was dropped, the name Ephraim stuck.
Ephraim City Hall: 5 South Main, Ephraim, UT 84627     Phone: 435-283-4631