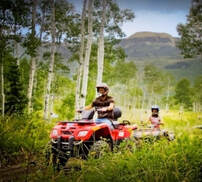 After Manti was settled, the land to the south was surveyed and canyons along the mountains were called Six Mile, Nine-Mile, and Twelve-Mile canyons, named for their relative distances from the Manti Temple. The land at the mouth of Twelve-Mile Canyon had been an Indian Farm reservation known as Arrapine Valley or Arropeen, named for a brother of Chief Walkara.

Mads Sorenson, Carl Olsen and Simon Hansen, scouted the site on a logging foray in 1870. The next spring they cut meadow hay, built cabins and began water division. Other families joined them by 1873 when they formed a United Order Cooperative Society on the north bank of the creek. The settlement was named Mayfield because of the beauty Mother Nature so lavishly displayed in the month of May.
Early in spring of 1875, 21 families moved from Ephraim and settled on the south side of the creek. They called this new settlement “New London.” The two settlements combined under the name of Mayfield when the first LDS Ward was organized July 4, 1877.
Town Hall: PO Box 541, 52 N. Main, Mayfield, Ut 84643     Phone: 435-528-5061
Mayfield Town Website